As members of the Healing Arts Commission, we are proud of the expansion of the Healing Arts Program since it began in 2014. We are honored to help create spaces throughout St. Joseph Healthcare that support healing, recovery and wellness for patients, employees and the community. We hope you enjoy!

Members of the Healing Arts Commission

Robert Shetterly shares a selection of his portraits highlighting women truthtellers as part of his Americans Who Tell The Truth Series. You can view this exhibit at The Gallery at 900 until March 31, 2023.

Robert Shetterly was born in 1946 in Cincinnati, Ohio. He graduated in 1969 from Harvard College with a degree in English Literature. At Harvard he took some courses in drawing which changed the direction of his creative life — from the written word to the image. Also, during this time, he was active in Civil Rights and in the Anti-Vietnam War movement.

After college and moving to Maine in 1970, he taught himself drawing, printmaking, and painting. While trying to become proficient in printmaking and painting, he illustrated widely. For twelve years he did the editorial page drawings for The Maine Times newspaper and illustrated National Audubon’s children’s newspaper Audubon Adventures and approximately 30 books.
Robert´s paintings and prints are in collections all over the U.S. and Europe. A collection of his drawings & etchings, Speaking Fire at Stones, was published in 1993. He is well known for his series of 70 painted etchings based on William Blake’s “Proverbs of Hell” and for another series of 50 painted etchings reflecting on the metaphor of the Annunciation.
His painting has tended toward the narrative and the surreal; however, for twenty years he has been painting the series of portraits Americans Who Tell the Truth. The exhibit has been traveling around the country since 2003. Venues have included university museums, grade school libraries, sandwich shops, the Cathedral of Saint John the Divine in New York City, and the Superior Court in San Francisco. To date, the exhibits have visited 26 states. In 2005, Dutton published a book of portraits by the same name. In 2006, the book won the top award of the International Reading Association for Intermediate non-fiction.
The portraits have given Shetterly an opportunity to speak with children and adults all over this country about the necessity of dissent in a democracy, the obligations of citizenship, sustainability, US history, and how democracy cannot function if politicians don’t tell the truth, if the media don’t report it, and if the people don’t demand it.

Shetterly has engaged in a wide variety of political and humanitarian work with many of the people whose portraits he has painted. In the spring of 2007, he traveled to Rwanda with Lily Yeh and Terry Tempest Williams to work in a village of survivors of the 1994 genocide there. Much of his current work focuses on honoring and working with the activists trying to bring an end to the terrible practice of Mountaintop Removal by coal companies in Appalachia, on climate change, and on the continuation of systemic racism in the US particularly in relation to the school-to-prison pipeline.

Since 1990, he has been the President of the Union of Maine Visual Artists (UMVA), and a producer of the UMVA’s Maine Masters Project, an on-going series of video documentaries about Maine artists.

Shetterly lives with his partner, Gail Page, a painter and children’s book writer and illustrator, in Brooksville, Maine.

Lansing Wagner shares a selection of his ceramic bowls in the display case in the lobby of the hospital main entrance until April 7, 2023. He has been making pots for 30 years at the Harvard Ceramics Studio.  He has done some scientific illustration and enjoys designing pots with creatures on them.  Creating larger bowls is his favorite since it provides him with a large canvas to draw on. 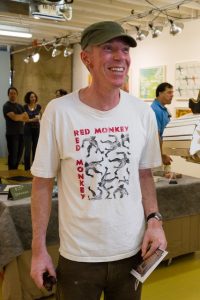 His first love was soda firing. Introducing a sodium carbonate solution into a very hot kiln vaporizes the solution, and the sodium seeks out the silica in the clay body to form a glaze. On the way, it interacts with the slips and oxides of the surface decoration. There are myriad unpredictable variables that affect the outcome of each pot. Meticulously applied surface details can be obliterated or brought to life. It’s a gamble: each piece is unique.

Because he can only soda fire a couple of times a year, he has been exploring cone six porcelain. This involves using blue slip on white porcelain and carving through it to draw the designs. he also uses water etching to create relief drawings glazed with amber celadon. 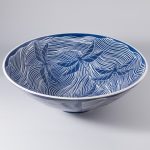 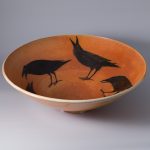 Wagner recently retired and continues to work in his home studio in East Blue Hill. Visit his website to see more of his work.

You will find the paintings of Diana Young on the first floor of the hospital. Young remembers being an artist since she was a child, in fact, she has been “making pictures” by painting landscapes in Maine and from her travels throughout the world for nearly 50 years.

Her work leans toward line, direction, force and motion, rather than form and naturalism. For her, an outdoor place is a point of departure rather than a study in nature. She is always looking for “the kernel of a place.”

“What makes an artist? Doing art with enthusiasm for many years is the proof. What starts our looking strange may become accepted as beautiful over time and I’m hoping that happens to me. Being an artist could well be one part talent and nine parts desire.”

Young is a graduate of Rhode Island School of Design and has exhibited in regional galleries and across artist cooperatives throughout Maine. She continues to create art in her studio located in Bangor, Maine.

Her art can be seen at the Eastport Gallery in person during the summer months (June through September) and online year round. You can see a beautiful collection of her work online and available for purchase by visiting Flood Fine Art.

You will find colorful paintings by local artist Jill Hoy on the third floor of the hospital. Hoy’s work focuses on the qualities of Maine light in her plein air oil paintings. Strong composition, rhythm, gesture, pattern, energy, power of place, and soul are primary focal points.

“I’ve spent my summers in Deer Isle, Maine since I was ten years old. Deer Isle has raised me to be a painter,” said Hoy. Reflecting on the exhibit, she shares: “All of my oil paintings are done outside on location. My work captures both an intimate relationship with nature, along with the movements of wide-open spaces that allow our heart to expand.”

Hoy has exhibited her work extensively in Maine and in locations across the United States. You may have seen her work on the cover of an L.L. Bean catalog or a Down East Magazine publication. Hoy’s work is on display in more than 600 private and corporate collections throughout the United States and Europe, including The Jill Hoy Gallery, which is open for the season in Stonington, Maine.

You will find contemporary landscape paintings by local artist Nina Jerome on the first floor of the hospital. As a long-time resident in Maine, Jerome finds inspiration for her work in both natural and constructed environments, drawing and painting in series that examine visual variations of place. For her, the painting process conveys her personal direction through the land as she witnesses its light, movement, and changes.

Jerome spends the warmer months in coastal Maine, a rich visual resource with its undeveloped shoreline and wide-ranging tidal fluctuations. She has also explored sense-of-place in other Maine areas. Jerome has completed residencies on two of her favorite Maine islands – Great Spruce Head Island and Great Cranberry Island – and has created paintings for fourteen public art projects in Maine including a series for the Penobscot Judicial Center in Bangor.

This exhibit includes paintings dating from 1980 to the present. Notable series presented here are “Quiet Tension” (1995), a record of Jerome’s walks along the rocky shore in Addison, ME, “Altered Landscape” (1986), construction views of the Veterans Remembrance Bridge across the Penobscot River, “Winter Power” (2005), a series depicting the steam plume marking the location of an electricity generating plant along the Penobscot River, “From the Kayak” (2006), images of floating between sea and sky in Addison, ME, and “Homage to the Ocean” (2013), a series that wove words written about climate change into the images of the sea.

For more information about the St. Joseph Healing Arts Program, please contact us. 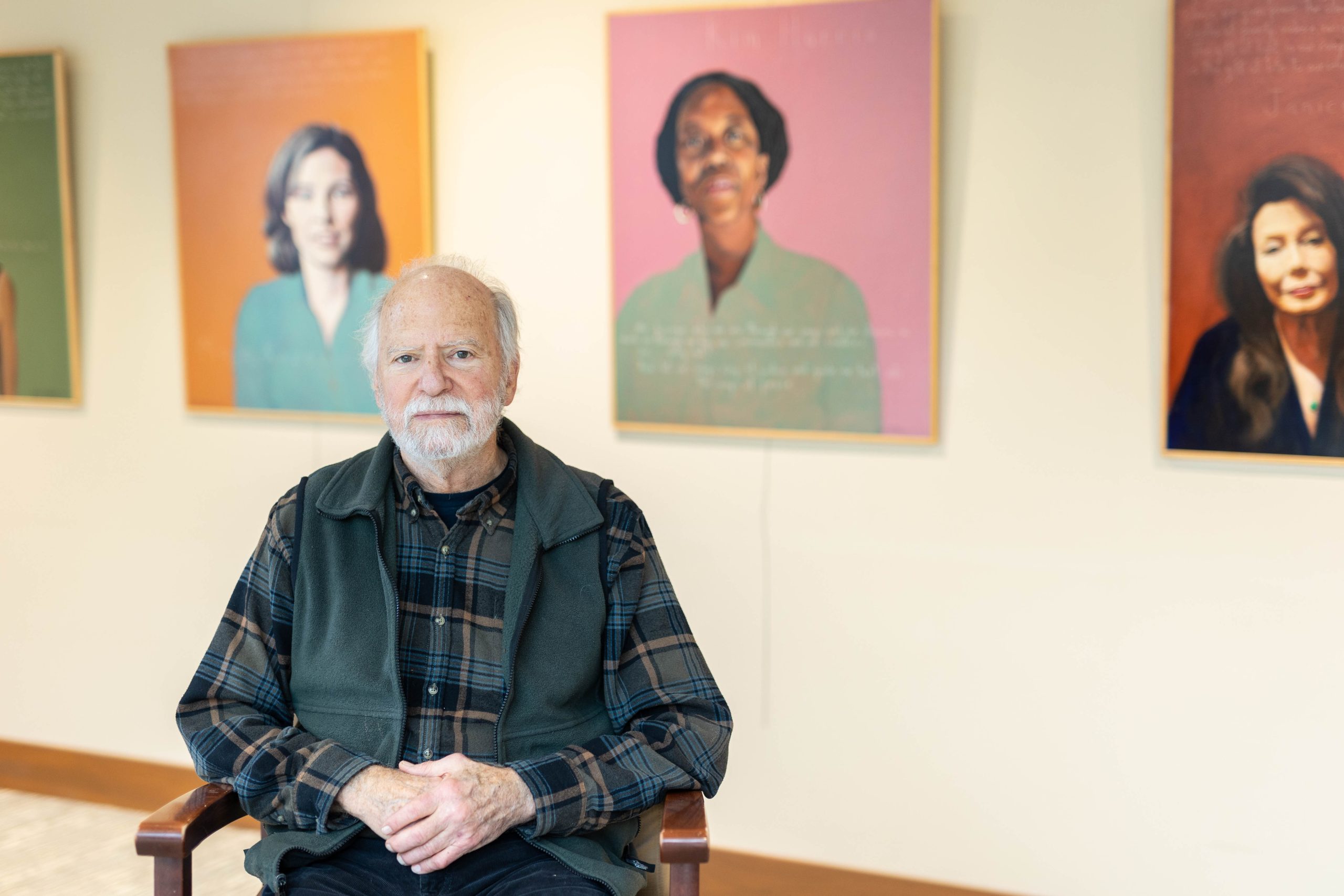 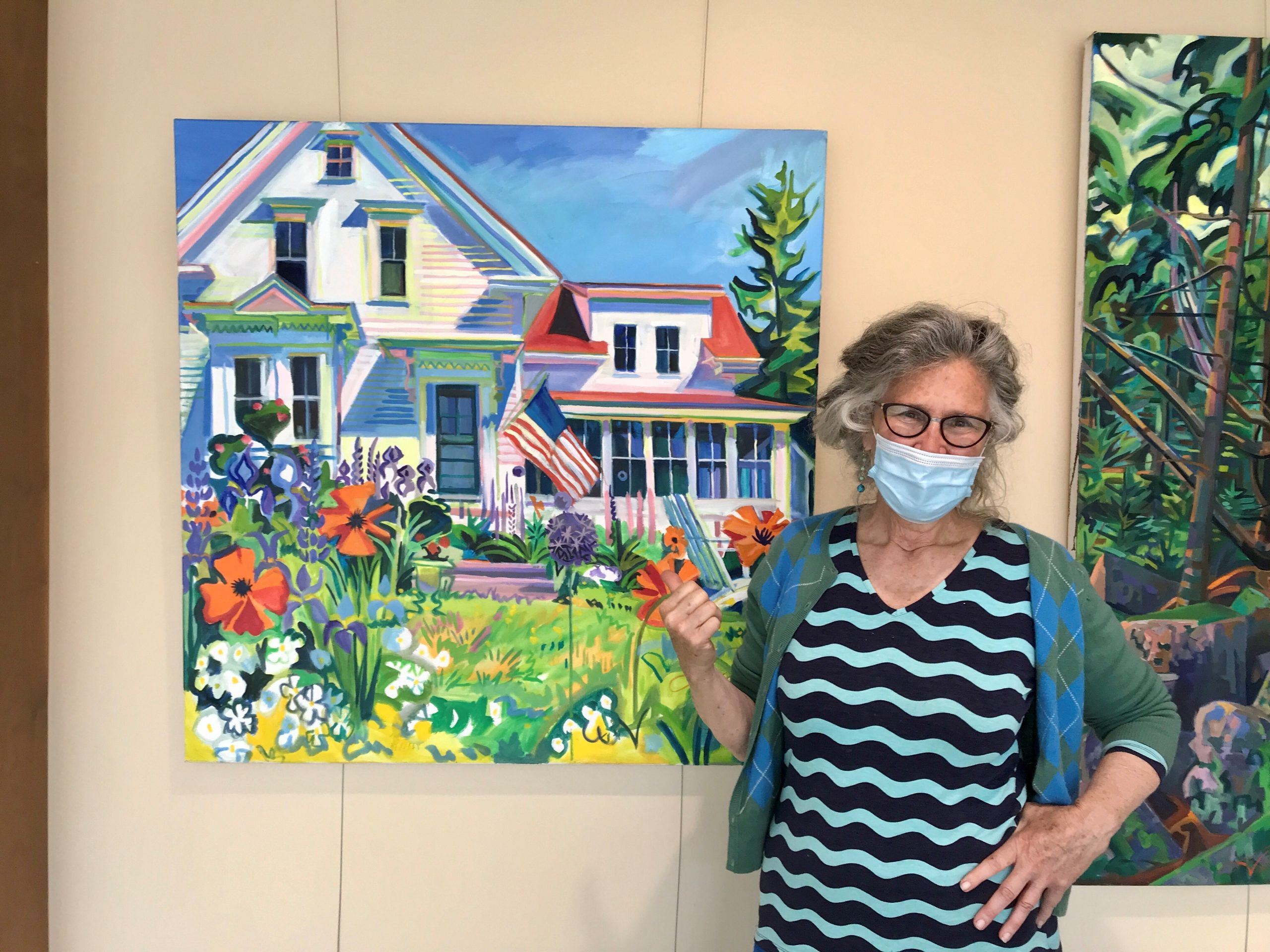 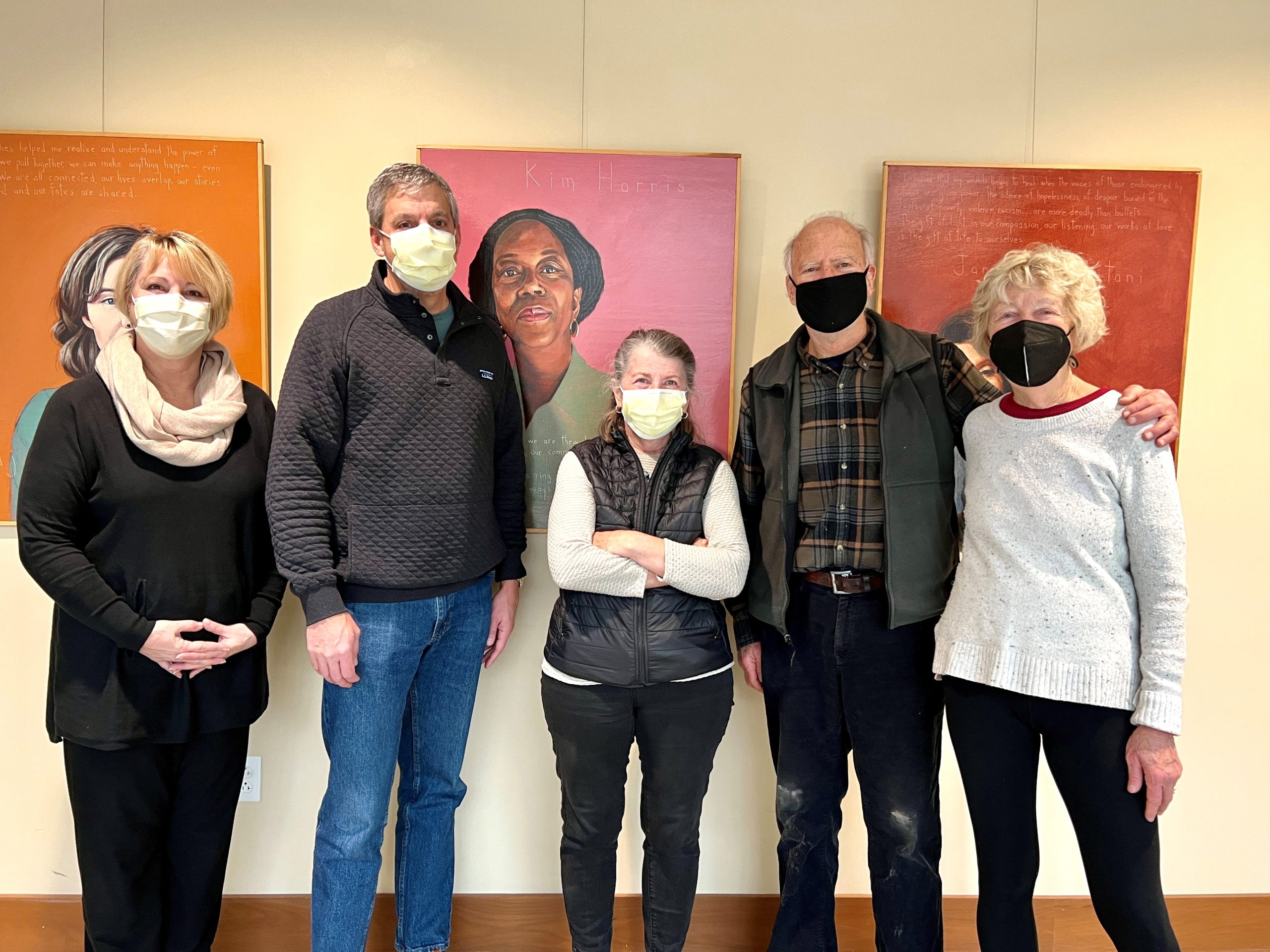 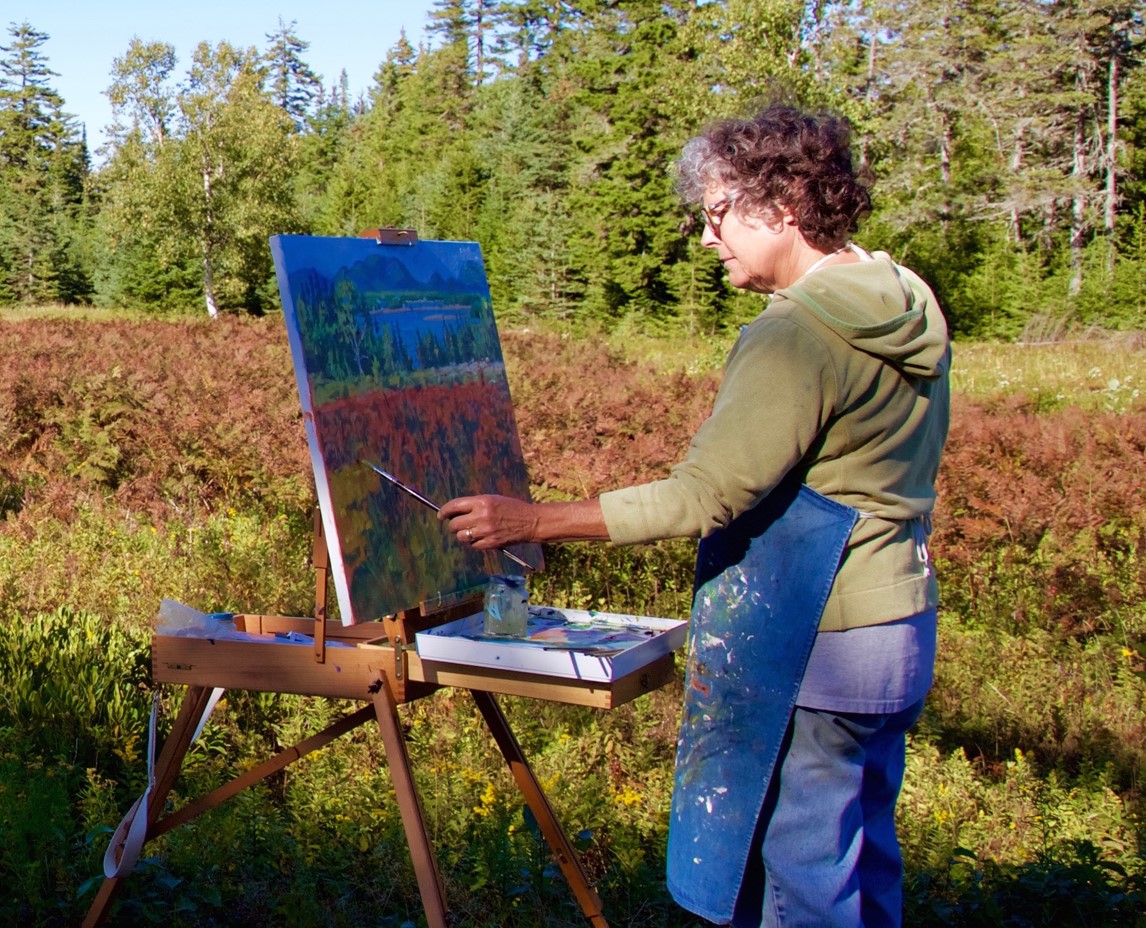 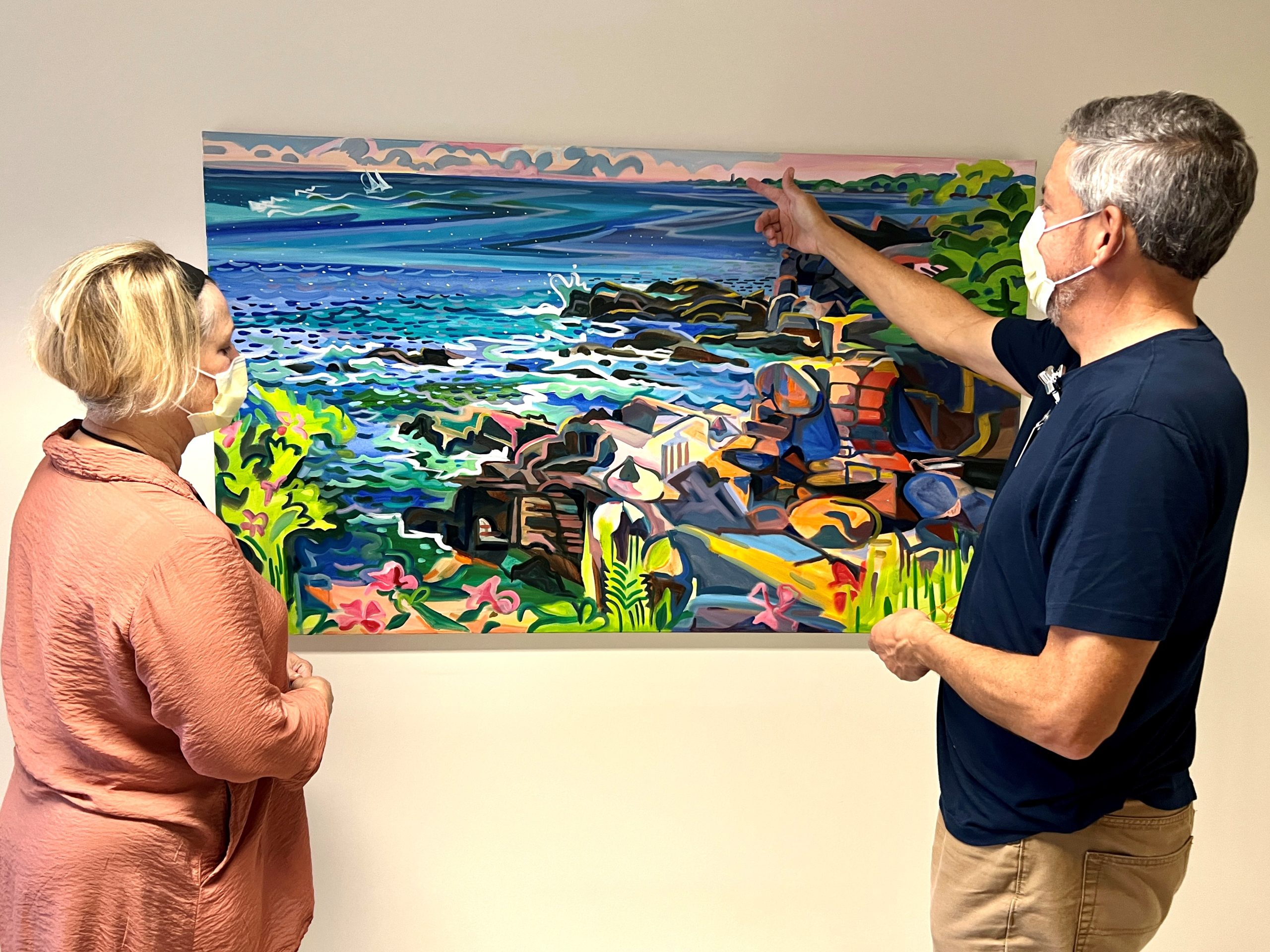 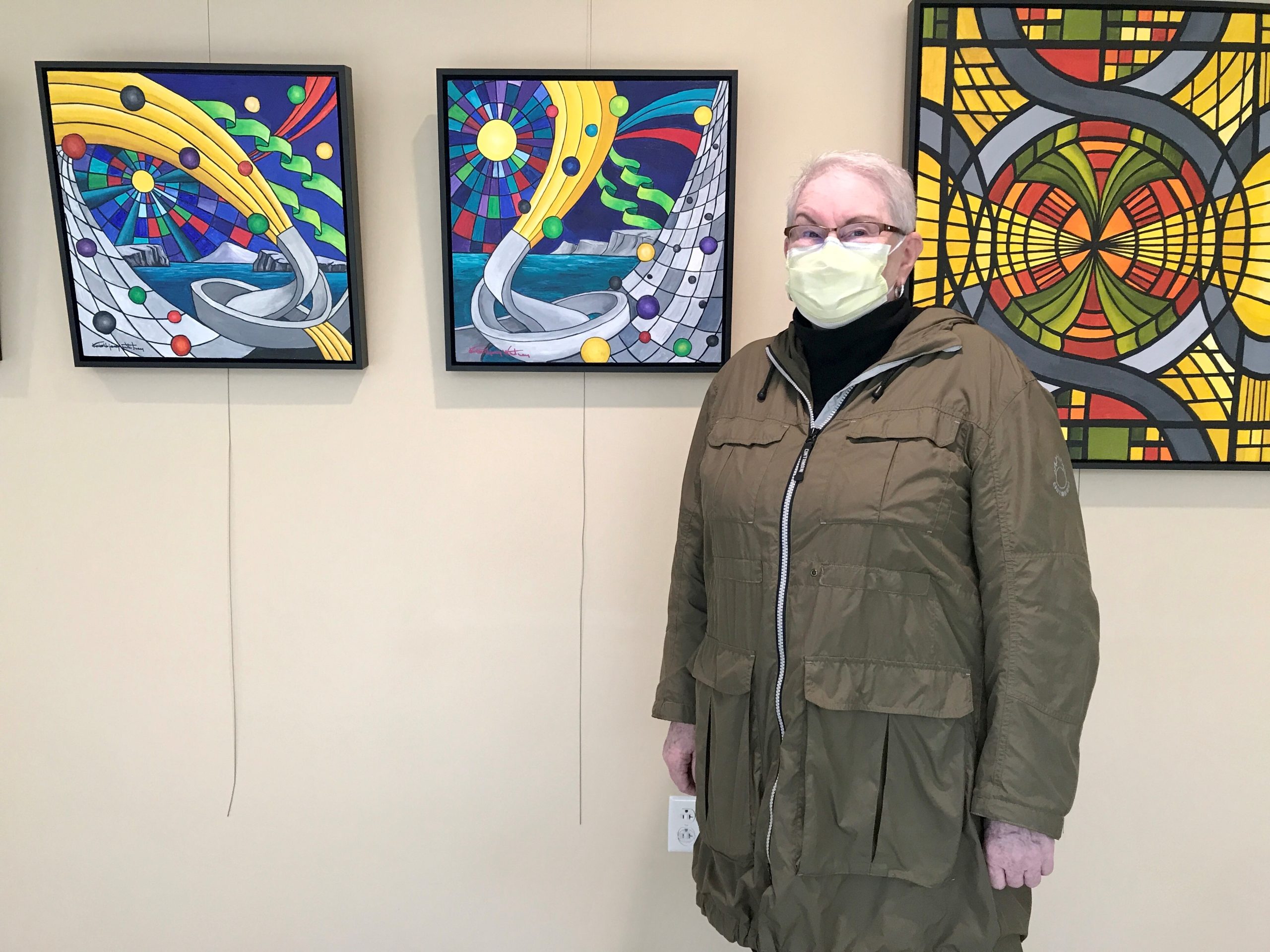 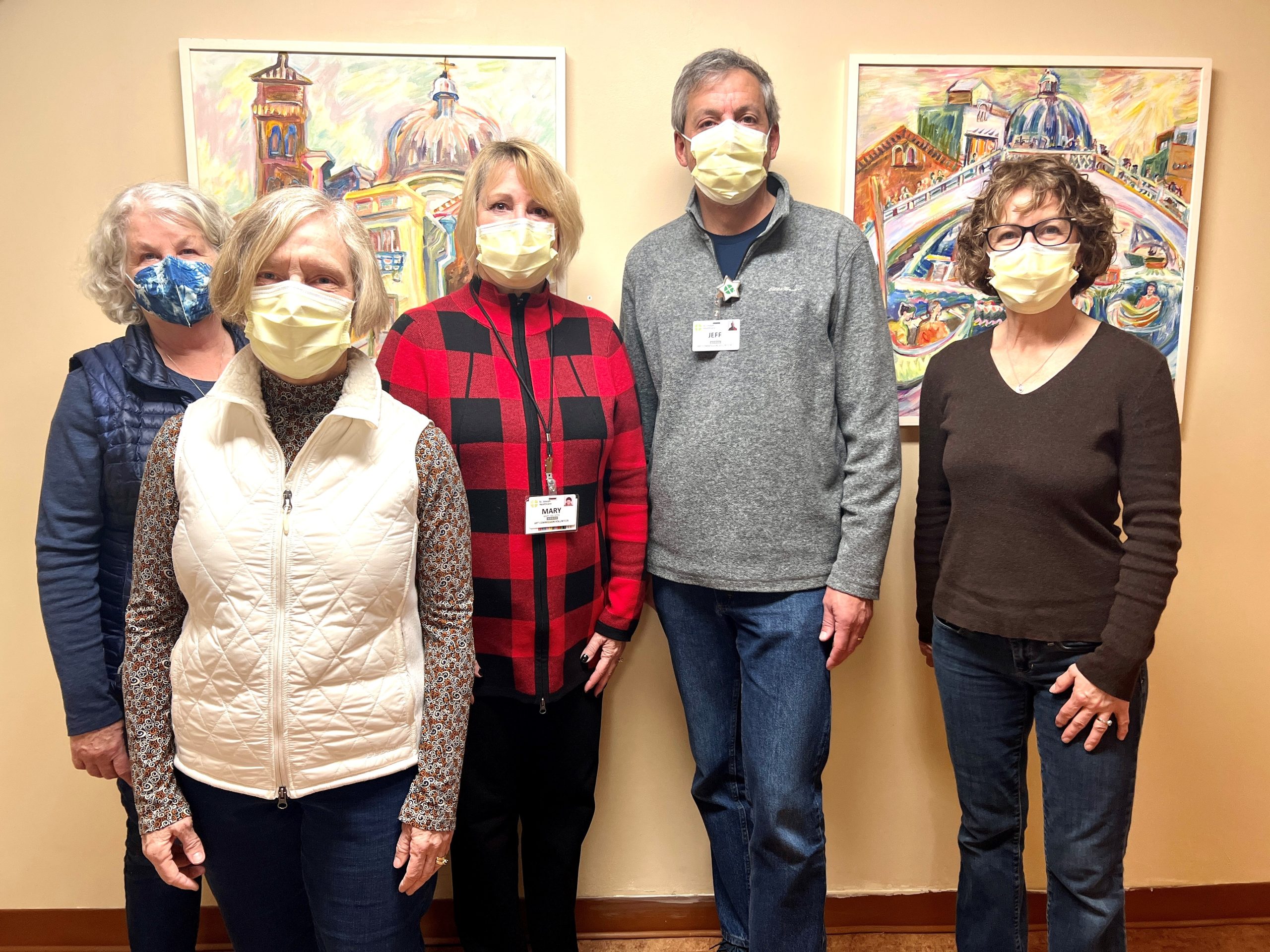 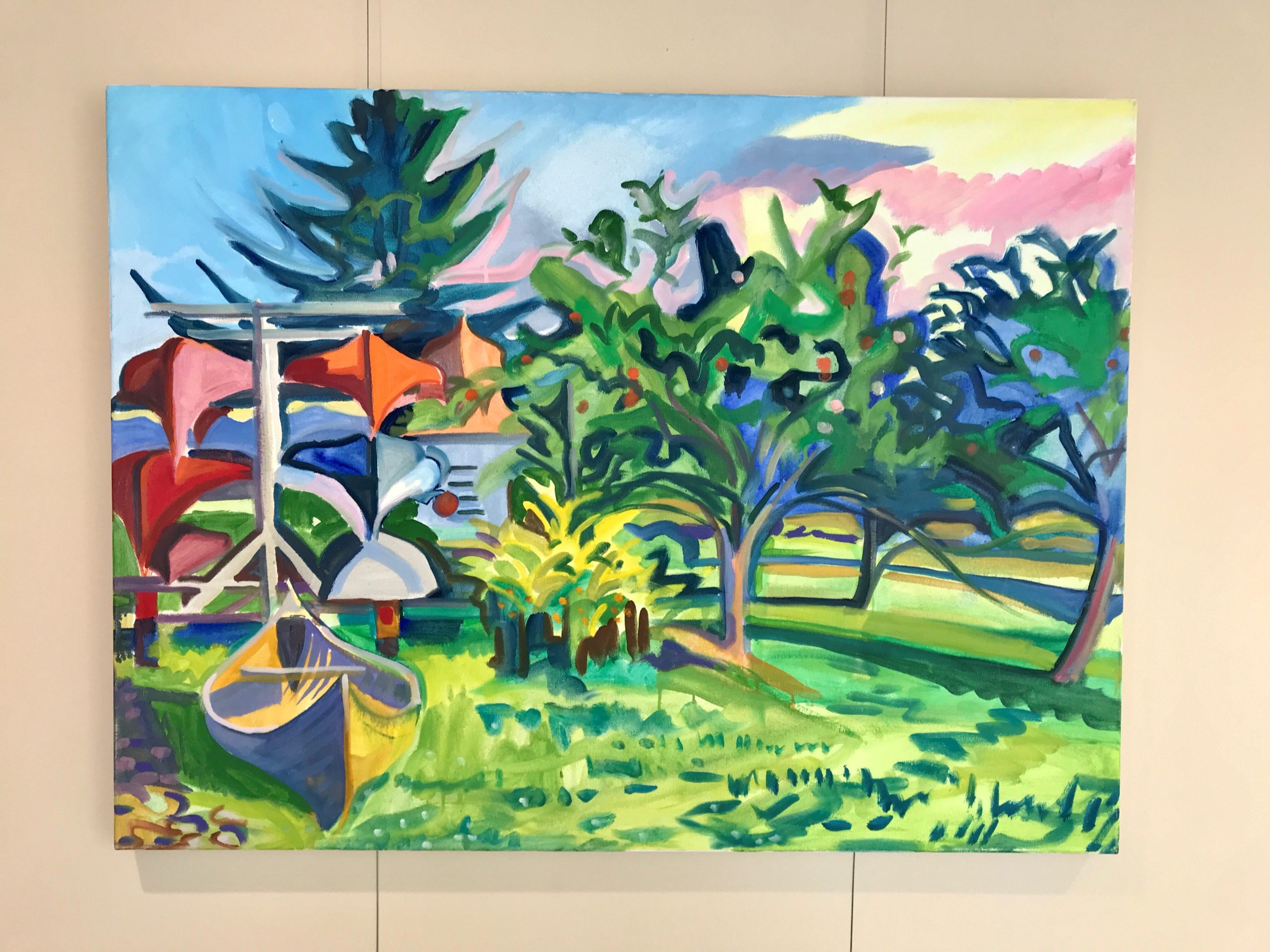